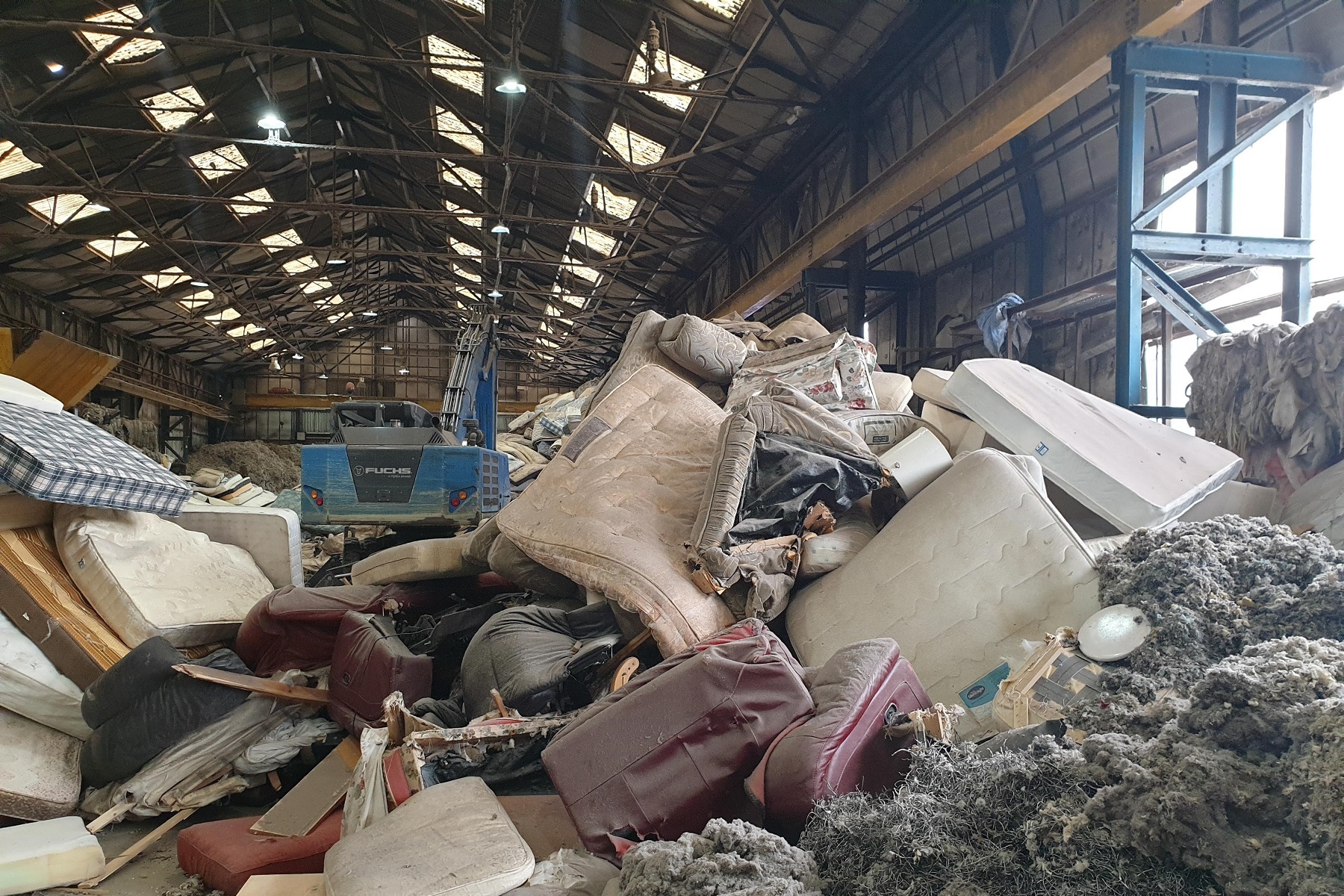 Following 18 months of research, design and development, an automated mattress recycling line is now in full operation at Textek. And now all eyes are on a target to recycle one million end-of-life mattresses at the facility in 2020, thanks to two UNTHA XR3000C shredders that lie at its heart.

The Shropshire operation – pitched by the organisation as the UK’s most advanced bulky waste processing plant – can mechanically dismantle a mattress in as little as 30 seconds, compared to the seven minutes it would take for a skilled worker to manually break down this complex product type.

UNTHA’s robust machines – with almost 3m wide loading apertures, perfect for this bulky waste stream – shred the mattresses with ease, down to a <50mm particle size to liberate the steel from the flock. Sophisticated downstream technology then separates clean flock from contaminated material – the latter of which is fed back for re-shredding to ensure a 100% recycling rate.

Allen Jackson, Director at Textek, elaborated: “An estimated 7 million mattresses were disposed of in 2017, at a cost of at least £20m, before considering transport and handling. This – coupled with illegal dumping, not to mention the environmental and commercial cost of manufacturing new replacement products – means the impact of this waste stream is quickly spiralling.

“While government initiatives are gradually looking at improved strategies for bulky waste handling, we identified a need to move faster, so turned our attention to designing our own automated line.

“Following substantial investment, the facility is installed, tried and tested and now stands to divert one million mattresses from landfill in the next 12 months alone.

“But we don’t want to stop there – already we’re thinking about the creation of additional dedicated bulky waste recycling lines, in other parts of the country.”

It is estimated that the recycling of one million mattresses in 2020, will result in recovering approximately  20,000-25,000 tonnes of steel wire, which can be sold, recycled and remanufactured, in line with the waste hierarchy. With its high calorific value (30mj), the clean flock also has the potential to be mixed to produce an SRF for the Waste to Energy industry.

Commenting on the project, UNTHA UK’s sales director Gary Moore said: “The National Bed Federation published a report in June 2019 which admitted the ambitious nature of the target to divert 75% of mattresses away from landfill.

“The NBF itself set this target in October 2018 but considering the recycling rate at the time of writing the report was only 20%, the uphill struggle is clear.

“The industry needed a step change and what Textek has done, is truly inspiring. We always say our technology is designed to process even materials that are deemed unshreddable, and it’s a pleasure to see an organisation push the boundaries of innovation and put our machines to the test.”

Textek rigorously vetted several competitor shredders as part of the technology selection process. The XR was deployed to the site for a one-week trial to prove it could handle the variety of foam and sprung mattresses currently being disposed of in the UK. Impressed with the results, Textek then took the machine back for a second trial to ensure the equipment could achieve capacity targets.

Read the Full Story
Home | Latest News | UNTHA XR targeted to recycle one million mattresses at new Textek facility
Don't miss out!
We use cookies to ensure that we give you the best experience on our website. If you continue to use this site we will assume that you are happy with it.Ok