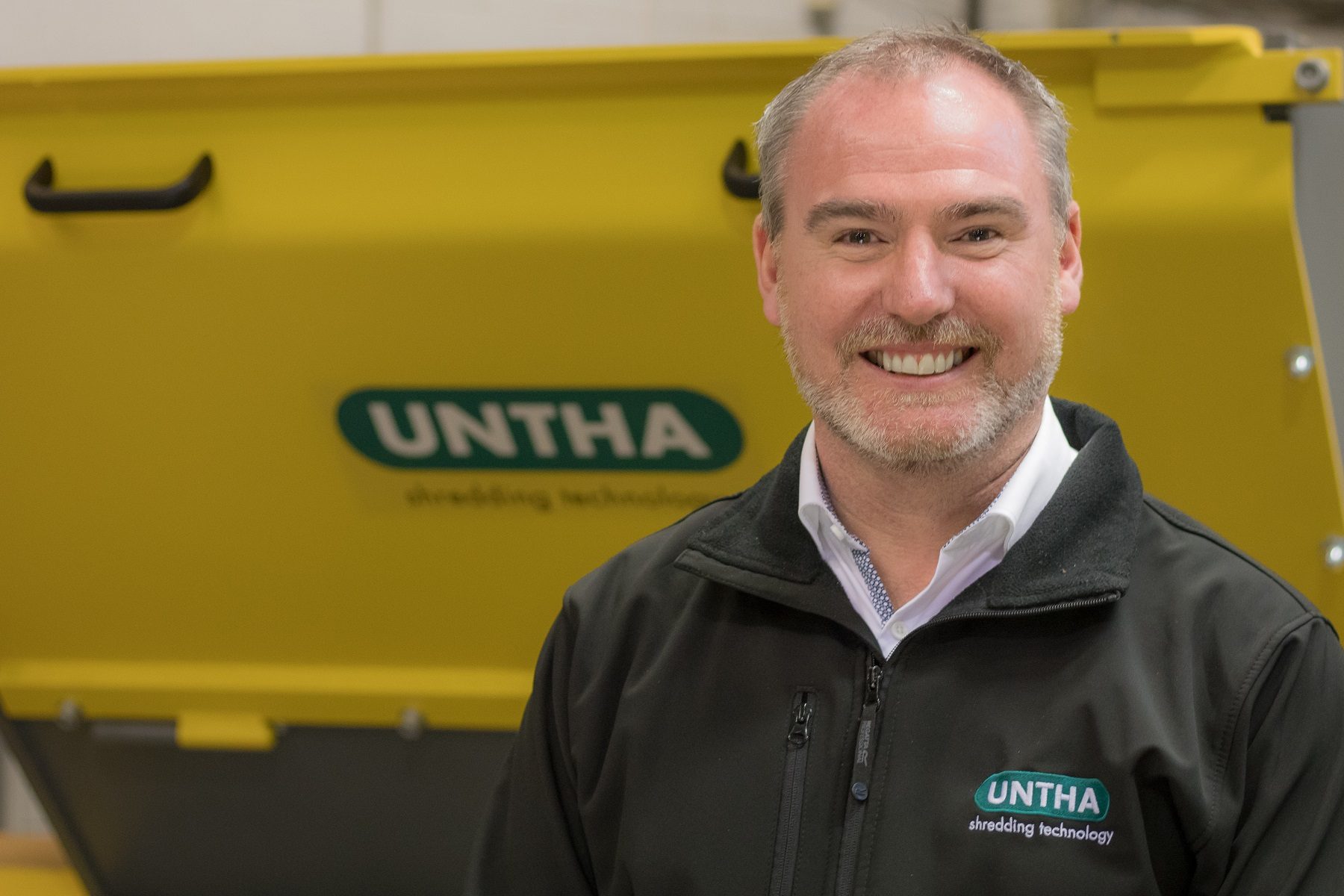 He joined the business as a sales manager and well-respected Waste to Energy specialist back in 2009. Fast forward a decade and Marcus Brew is now head of the company and managing director with bold plans for the future.

So, to mark his ten-year anniversary with the company – in true This Is Your Life style – we’ve looked back on some of his highlights…

Marcus arrived at UNTHA UK with approximately 20 years of experience working with technically-complex capital equipment. He had been involved in multi-million pound blue-chip engineering projects around the world, in production environments ranging from automotive to aerospace – and of course, waste management.

In both the UK and overseas, he quickly became one of UNTHA’s ‘go to’ alternative fuel production experts, having played an active role in some of the country’s most exciting waste to energy and biomass projects. And as his reputation grew so too did the opportunities he was asked to support on. These included speaking at industry events including most recently the Global CemFuels Conference in Amsterdam – and he’s even graced the BBC Breakfast Show’s famous red sofa!

His passion for devising shredding solutions to satisfy even the toughest of client requirements means he has been a driving force in not only the advancement of customer projects but also the expansion of UNTHA UK.

As a result, in 2016, he took on the role of managing director as industry stalwart Chris Oldfield moved – at the time – to the position of chairman.

Since then he has built on Chris’s legacy, maintaining not only the company’s high standards but taking the business to the next level of growth.

Only this year, UNTHA UK achieved prestigious recognition in the Digital Enterprise Top 100 list, for example, following the team’s extensive investment in slick technologies that will bring about quality-driven efficiencies for the organisation and customers alike.

2019 has also seen the launch of UNTHA UK’s rebuild division, which has been met with vast industry praise; the overhaul of the company website; a series of notable appointments; the delivery of several complex client projects and ongoing refurbishments of the North Yorkshire HQ as the popular test centre continues to attract more visitors keen to solve the seemingly impossible, with the help of an UNTHA machine.

So when he’s not drinking home-made banana smoothies for breakfast (it’s an in-house joke) what else has Marcus been up to, in the eyes of his colleagues?

“Marcus, today, is not the same guy that I took on ten years ago,” recalls founder Chris Oldfield. “But he clearly understood the theory of the sales process, and so on his first day I made it clear to him that I didn’t just want another salesperson doing what everyone else had done before him. His role was to help make us the “go to” company within this industry.

“It is important to note that the industry is not the same now as it was a decade ago – it has since matured and become a lot more sophisticated and commercially astute.

“On his first trip out with me, we went to Sellafield Nuclear plant where I let him drive – let’s just say that journey taught me that this was not one of his fortes, as I was nearly car sick!

“The other lesson learned that day was that you can’t shut him up. I told him to say nothing in the meeting – encouraging him to observe instead – but he had lots to contribute. All jokes aside though, I’m glad he did, as he brought a technical knowledge that was really well received by the client.”

So, while driving may not be his strong point – something colleague Gemma Beharry would agree with, given his encounter with a golf bunker – the same cannot be said for his commercial acumen.

“He is a very quick learner with a very good memory,” elaborates Chris. “He can read a situation very quickly, understand it and then react to it while others are still just processing the initial points.

“He was therefore the natural successor for MD. Being particularly good on the commercial side of things, his input and experience has helped UNTHA UK through lots of difficult situations. He worked with me in every aspect of the business for a number of years – all in preparation for what he now does so well at the helm of the company.”

Driven, motivated, dedicated and a comedian – not to mention Scouse – are just some of the words that sprang to mind when colleagues were asked how they’d describe Marcus. And his most-known catchphrases range from “Just do it!” to the excessive use of the word “Mate” – with several others not to be published pre-watershed.

His great sense of humour seems the common theme running throughout comments from team members Andy, Liz, Julian and Julie. But all jokes aside there’s a real sincerity to the points made too, with Sharon summarising, for example: “His transition to MD, and the role he has played driving the business forward to a corporate, digital organisation is highly commendable. Our UK operation may be small in numbers, but we’re certainly BIG in attitude!”

And his humanity seems to be what makes him a likeable character throughout the global operation and into the wider industry, with Chris summing up perfectly: “I have always said that if ever I was in a difficult situation it would be Marcus I’d want by my side. I am privileged to be able to call him my friend.”

Congratulations Marcus – here’s to the next ten years!

‘On the spot’ with… Julie Cassidy

Read the Full Story
Home | Latest News | UNTHA UK’s MD marks decade with the company
Don't miss out!
We use cookies to ensure that we give you the best experience on our website. If you continue to use this site we will assume that you are happy with it.Ok